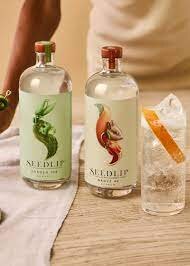 What happens if you mix a 370-year alcohol distillation book, a nine-generation family of farmers, and a design agency executive? The world’s first distilled non-alcoholic spirits. Ben Branson was just trying to get a decent non-alcoholic drink on a Saturday night in London in 2013 when he encountered a bad mocktail. He said, “I was sick of drinking tonic water on its own and I didn’t want to order a Shirley Temple with umbrellas and cherries hanging off it…I wanted to solve the dilemma of what to drink when you’re not drinking – a good grown-up, sophisticated alternative.”

Intrigued, Branson came across a pdf version of the book The Art of Distillation, originally published in 1651 by English physician John French. Fascinated by this book and with a family background in farming, Branson bought his own copper still on the Internet and experimented with distilling home-grown herbs to create the first non-alcoholic spirits. He spent the next two years in his kitchen fine-tuning his concoctions with various herbs, spices, and vegetables, including hay, peas, rosemary, and thyme.

Two years later, Branson had his first customer before he even had his first labeled bottle. According to the company, Branson “launched Seedlip Spice 94 in London’s Selfridges on November 4, 2015. His first handmade 1,000 bottles sold out within three weeks, the second 1,000 in three days, and the third in 30 minutes online.”

Branson effectively used Competitive Categorization to identify and own a third category of beverages between alcohol and soft drinks. Branson said, “we’re challenging the industry, both the alcohol industry and the soft drinks industry, by trying to find our own way in the middle, to find this grey area that we want to occupy in this category that we’re building.” Calling Seedlip a “game-changer,” Forbes Magazine in 2019 said, “Founder and teetotaler Ben Branson, 36, has broken through against the odds, by pioneering a new category of nonalcoholic drinks, for adults, ‘distilled non-alcoholic spirits.’”

Despite the presence of over 50 competitive brands, Seedlip currently commands a 70% share of the non-alcoholic spirits global market. In 2019, Diageo Corporation, a global leader in alcoholic beverages, acquired Seedlip, its first acquisition of a non-alcoholic beverage company in its 258-year history. John Kennedy, Diageo President Europe, Turkey, and India, proclaimed that “Seedlip is a game-changing brand in one of the most exciting categories in our industry.”